Time has proven Rand Paul had his thumb on the pulse of the science of the virus, and understood the unintended consequences of government interventions better than public health officials. 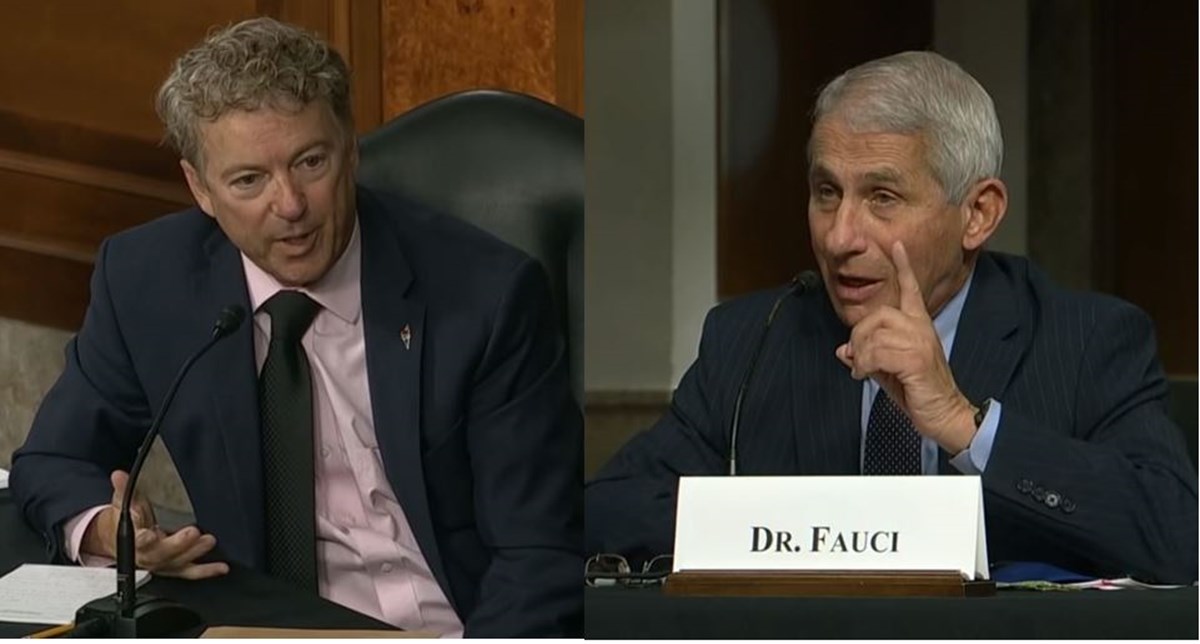 With most sporting events canceled for much of the past year, audiences have tuned into a new kind of sparring to fill the void: political debates. And two opponents have quickly risen to the top of their weight classes—Sen. Rand Paul and Dr. Anthony Fauci.

The two have paired off for numerous rounds in a feud that’s representative of the one the rest of the country has been having—how should the government respond to the coronavirus.

In each of these exchanges, the mainstream media and many on the left have rushed to condemn Rand for his views and back Fauci’s various stances. But with hindsight on our side, we can now look back on these debates and determine which of their perspectives history has proven correct.

Here’s a look back at some of their most memorable moments in the ring.

“There’s a great deal of evidence that’s actually good—good evidence—that kids aren’t transmitting this—it’s rare—and that kids are staying healthy, and that yes we can open our schools,” he said in a committee hearing.

Fauci vehemently disagreed, alleging that children could spread the disease as easily as adults and advocating federal regulations around reopening schools.

But a mere six months later, Fauci was singing Rand’s tune—walking back his earlier comments.

“If you look at the data, the spread among children and from children is not very big at all,” Fauci stated. “Not like one would have suspected.”

To be clear, the science didn’t change over those six months. The politics did. Data always showed it was relatively safe to send kids to school.

In March, the two doctors duked it out again, this time over the question of whether or not Americans should continue to wear masks post-vaccination.

“You’re telling everyone to wear a mask,” Paul said. “If we’re not spreading the infection, isn’t it just theater? You have the vaccine and you’re wearing two masks, isn’t that theater?”

“Here we go again with the theater,” Fauci responded.

Yet the official narrative on masking post-vaccines changed only a couple days later as politicians realized their security theater was discouraging Americans from taking the vaccine.

In a video, Fauci all but admitted his mask mandates were for show stating, “I didn’t want to look like I was giving mixed signals.https://platform.twitter.com/embed/Tweet.html?creatorScreenName=feeonline&dnt=false&embedId=twitter-widget-0&features=eyJ0ZndfZXhwZXJpbWVudHNfY29va2llX2V4cGlyYXRpb24iOnsiYnVja2V0IjoxMjA5NjAwLCJ2ZXJzaW9uIjpudWxsfSwidGZ3X2hvcml6b25fdHdlZXRfZW1iZWRfOTU1NSI6eyJidWNrZXQiOiJodGUiLCJ2ZXJzaW9uIjpudWxsfSwidGZ3X3R3ZWV0X2VtYmVkX2NsaWNrYWJpbGl0eV8xMjEwMiI6eyJidWNrZXQiOiJjb250cm9sIiwidmVyc2lvbiI6bnVsbH19&frame=false&hideCard=false&hideThread=false&id=1394657595949002758&lang=en&origin=https%3A%2F%2Ffee.org%2Farticles%2Frand-paul-has-won-every-single-round-against-fauci%2F&sessionId=936b4cf083916702878fa73471b597e97234fe83&siteScreenName=feeonline&theme=light&widgetsVersion=82e1070%3A1619632193066&width=550px

For months, it has been taboo to even question the COVID-origins story.

Americans have been told the virus made the jump from animals to humans naturally, and suggestions that the virus originated from a Wuhan lab studying the infection in bats has been condemned as a conspiracy theory.

In their latest match-up, Rand Paul pressed Fauci on the story and demanded more information around funding the US gave to the lab in question.

“Dr. Fauci, we don’t know whether the pandemic started in a lab in Wuhan or evolved naturally, but we should want to know,” Paul said. “Three million people have died from this pandemic, and that should cause us to explore all possibilities.”

“To arrive at the truth, the U.S. government should admit that the Wuhan Virology Institute was experimenting to enhance the coronavirus’s ability to infect humans,” he continued. Paul went on to point out a grant from the National Institutes of Health (NIH), where Fauci works, to the Wuhan Institute of Virology (WIV).

“Sen. Paul, with all due respect, you are entirely and completely incorrect,” Fauci responded. He denied the “gain of function” research funding in question as well.

But following the dispute, the official story on the origins began to be backtracked. Media outlets softened their position, and some outright edited their previous articles condemning the story.https://platform.twitter.com/embed/Tweet.html?creatorScreenName=feeonline&dnt=false&embedId=twitter-widget-1&features=eyJ0ZndfZXhwZXJpbWVudHNfY29va2llX2V4cGlyYXRpb24iOnsiYnVja2V0IjoxMjA5NjAwLCJ2ZXJzaW9uIjpudWxsfSwidGZ3X2hvcml6b25fdHdlZXRfZW1iZWRfOTU1NSI6eyJidWNrZXQiOiJodGUiLCJ2ZXJzaW9uIjpudWxsfSwidGZ3X3R3ZWV0X2VtYmVkX2NsaWNrYWJpbGl0eV8xMjEwMiI6eyJidWNrZXQiOiJjb250cm9sIiwidmVyc2lvbiI6bnVsbH19&frame=false&hideCard=false&hideThread=false&id=1396769717805780994&lang=en&origin=https%3A%2F%2Ffee.org%2Farticles%2Frand-paul-has-won-every-single-round-against-fauci%2F&sessionId=936b4cf083916702878fa73471b597e97234fe83&siteScreenName=feeonline&theme=light&widgetsVersion=82e1070%3A1619632193066&width=550px

It was also confirmed that the NIH did fund research at WIV that analyzed bat specimens collected from caves in China to study their potential for infecting humans. The grant was made in a roundabout way through a nonprofit called EcoHealth.

Without a doubt, time has shown Rand had his thumb on the pulse of the science of the disease, the unintended consequences of government policies, and the proper way the government should have balanced public health with civil liberties.

Why has Rand Paul had the upper hand in each of these rounds? Is it because he is so much smarter? A better doctor? Perhaps. But more likely it is because Rand has been following more than the science. He’s been following his principles.

The pandemic created uncertain times, and in the face of such events, many attempt to play God and control the environment. They turn to the entity least likely to protect them, the government, and put their faith in central planning.

But history repeats itself and the old warning of Benjamin Franklin remains more relevant than ever, “Those who would give up essential liberty to purchase a little temporary safety, deserve neither liberty nor safety.”

Why do those who give up liberty for safety end up with neither? Because government central planning cannot keep people safe. It cannot stop viral diseases any more than it can stop tornadoes. At best, the government is capable of guarding and upholding natural rights, which should always be the focal point of any action it takes.

Because of the knowledge problem, people working in government will never have all of the information they would need to make the best decisions for 330 million other people. This basic economic hurdle produces humility in wise leaders who seek to leave most decisions in the hands of individuals or local governments. But arrogant men ignore it and believe they know what’s best for others.

As has been the case so many other times in history, the arrogance of central planners, like Dr. Fauci, compounded the harmful impact of the disease and created countless additional problems in their wake.